And so the scene was set for this year’s Children’s Circuit Camp!

The Camp, which took place in early October at Holmfirth Methodist Church, was attended by 23 eager children from around the Circuit. A packed program had been planned for the weekend, full of exciting opportunities for exploring harvest, culminating in the Sunday morning Harvest Service and Harvest lunch.

On the Saturday it was time to get creative with the various activity sessions on offer. Once organised into their groups, Apples, Oranges and Bananas (!), the children, accompanied by their team leaders, enthusiastically engaged with their activities.

The children became designers, tasked with creating a personalised logo/picture to draw on the patches of their brightly coloured draw-string bags. With artistic license applied, designs   varied immensely; food, family, a whale, favourite computer game characters, abstract patterns and even the Fairtrade Logo! As a surprise for the children, these would be filled later with a few goodies to take home. 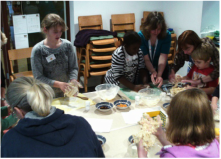 What harvest wouldn’t be complete without the thought of bread? Not only did we think about it, but the children baked it! All the ingredients were mixed thoroughly to make the dough. Following the addition of raisins and/or chopped apricots, sticky hands shaped the dough to make small fruit buns before baking in the oven. Delicious…. A collaborative wheatsheaf was also baked to share with everyone during prayers in the Harvest Service.

​All Food Comes from God became the strapline for our collaborative Harvest Banner. Each  group were asked to think about the sources of our food and responded by creating collages using a range of materials. These depicted foods growing on trees and bushes, food from animals and food grown in the fields. The banner was then displayed in church - check out the pasta tractor! 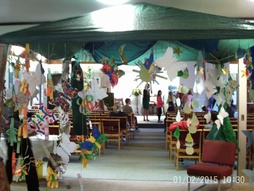 ​Up for a challenge, we constructed our very own tabernacle; a temporary shelter for the Jewish people for feasting and celebrations following the harvest! Throughout the weekend we watched it slowly evolve from a garden gazebo to an amazing shelter wrapped up in the natural world around it. The children created, painted and decorated bright butterflies,  wiggly worms, paper-chain flowers and smiling fish…. There was also a glittery sky of sun, moon and stars above. Prayers were written on paper apples and pears and hung on the tabernacle along with the other decorations – a real feast for the eyes! This proudly stood in the foyer and formed the entrance into the church ready for everybody on the Sunday morning.

After lunch, we enjoyed a short scenic walk by the river as we headed to The Sands Recreation Park. The children had great fun on the playground equipment and importantly for t  he leaders, expended lots of energy! Other active elements of our program for the weekend included the Harvest Olym–pic Your Own Games (sprout and spoon race, potato relay, sucking peas race…) with chocolate medals for all participants! There was also an opportunity for the children to learn some new dances at our Harvest Hoedown – chaotic, but fun! 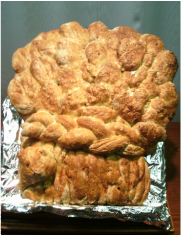 Saturday evening was brought to a close with a short act of worship, considering God as a Faithful Gardener and including the newly learnt and much popular song Harvest Samba. For those sleeping over, there was the treat of the film Ratatouille and popcorn before bed – spot the continuing food theme!
​
Barbara Rochester and Sally Robinson led the Harvest Service on the Sunday morning, incorporating many of the elements the children had been working on the day before. The children delighted in leading the Harvest Samba in church, shaking their percussion instruments enthusiastically! They were also involved in doing some drama. After the service, the children, along with family members, had been invited to share in the Harvest lunch. Amazingly the catering extended to feeding approx. 75 people, with everyone receiving a hot meal and a pudding followed by tea/coffee! It did feel a bit like the feeding of the five thousand!
​
There are many thanks to be said to all the leaders involved in helping to make this year’s Children’s Circuit Camp a great success and also to Holmfirth Methodist Church for hosting and providing top-notch catering!